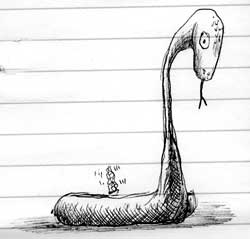 When I was a kid in the 1970’s a movie was on TV called Sssssss, starring Dirk Benedict (before Battlestar Galactica and the A-Team fame) as a college student that volunteers to help a scientist work with snakes. It turns out that the scientist injects his ‘helpers’ with a series of king cobra venom doses that has the unwitting students turning into snakes. The creepiest part of this movie is when we see one of his failed experiments in a carnival side show — half boy/half snake.

The memory of that scene has always stuck in my mind. In fact, I found out that my little brother’s wife will not allow discussion or mention of the movie in her presence or household because of that scene. 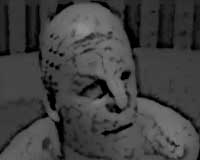 Now, some 30 years later, I like to rent old horror movies that I enjoyed as a youngster for my own kids to watch. I rented Sssss from Netflix recently and once we started watching realized that it had originally been released in theaters with a PG rating. I found that it could have used some of that “edited for TV” magic for the kids.

Cuts.com (co-founded by my friend, whiffle ball nemesis, and old Half.com and Infonautics colleague, Sunny Balijepalli) promises to allow the ability to edit and mix movies you own so that you can play them the way you want on your pc or desktop.

What will be cool is when Apple releases its iTV product in 2007, I would assume you’d then be able to stream your Cuts-created videos to your living/family room entertainment center, rather than having to watch on the computer.

This entry was posted in doodle, doodles, media, movies. Bookmark the permalink.