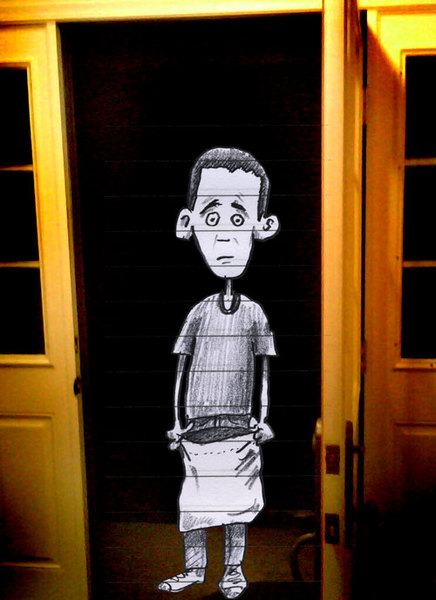 Witness the neighborhood teen in his Halloween costume. A year ago, when he was 12, he had a proper costume on — SpiderMan or similar. This year, a year older, a year cooler, out with his 13-year-old buddy, he was our first trick-or-treater.

His friend at least put on a white t-shirt and greased his hair back and called himself a ‘greaser’. This guy had his middle school gym tshirt, a pair of jeans, a pillow case, and an air of entitlement.

My wife and I have long been upholders of the certain Halloween rules:

1. All trick-or-treaters must say “Trick or treat” and/or “Happy Halloween.” “Hello” and “how are you” are nice but are not acceptable replacements for the real deal.

2. A trick-or-treater must demonstrate, if not creativity, the willingness to go beyond a goofy hat, or in this guy’s case, the extremely ordinary. [Note: While in mid sentence here a group of 12 and 13 year olds arrived. 2 were held aside for claiming to be ‘pimps’ because one had a hat on with a feather. The 2nd one didn’t even have a hat on. A young lady was held aside because she was claiming to be ‘goth’. I asked her if she was ‘goth’ every day and she claimed she wasn’t (though her friends disagreed).]

3. If a “Thank you” is not provided, they are provided a reminder.

A trick-or-treater failing Rule 2 may opt to do a trick in order to gain their treat. Tricks are evaluated, especially in the case of teens, on the ability for a teen to embarrass themselves in front of their peers. In the case of the 13-year-old, his ‘greaser’ friend showed me that he could move his eyebrows up and down independently. PASSED. The plain-guy borrowed his friend’s bike, did some wheelies and proceeded to fall off the bike, twisting his friend’s handlebars in the process. PASSED. [The pimp boys and the goth girl noted above performed cartwheels on the dewy grass.]

Memo to myself: distribute a ‘rules of Halloween’ throughout the neighborhood the weekend before Halloween next year (and probably get the house egged next Mischief Night as a result).

This entry was posted in costumes, halloween, lame, teenagers. Bookmark the permalink.