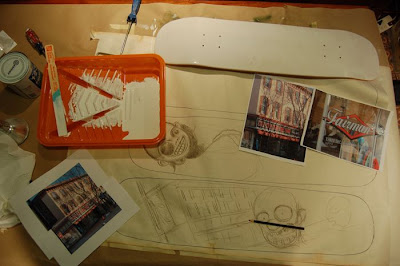 One of things I love about some blogging artists is when they show a work-in-progress or the steps it took to get to their final version. Superbadfriend, Jess, is good at showing things she’s working on and when they’re finished.

Most of what I do is drawn in a notebook or sticky note and that’s the extent of my works-in-progress. I rarely devote much enough time to any of my so-called art. So when I took on this project in the late winter I decided I would at least document the process, frustrating as it was, to see what we could see.

The Montana SkatePark Association, based in Missoula, MT, “helps Montana communities establish skateboard parks and skateboard program development with the goal of creating additional recreational opportunities and positive alternatives for its residents and underprivileged youth.” In their On Deck Art Auction, each year they ask artists from around the country (and world?) to create art out of a blank skate deck. They offer the work up in an online gallery and auction which is followed up with a live auction in Missoula.

My sister has lived in or near Missoula off and on for the past 14 years. She told me about the program and I submitted an application to be considered one of the artists with this blog as my ‘portfolio’. I bet my sister a ton of money saying there was no way I’d be selected as one of the fifty. However, about a month after applying, I received an email from them saying I had been selected. A month later I received a blank skate deck via FedEx with instruction to get on it and send it back. 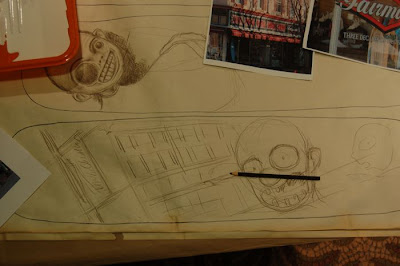 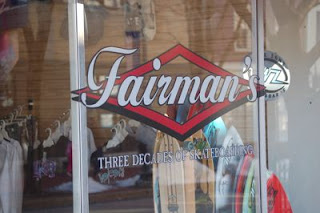 After receiving the board, I started trying to draw up some ideas on old newsprint. One of my concepts was to incorporate our local famous skateshop in West Chester, PA: Fairman’s. I went one Sunday morning and took photos of the store hoping for inspiration.

I was feeling more than a bit the phony for trying to do ‘skate art’ having never mastered the skateboard beyond the project my Philadelphia roommate and I accomplished one summer over 20 years ago. We built a longboard skateboard out of an old wooden water ski and proceeded to wow the Pennsport neighborhood kids as we went up and down Wharton Street.

Another idea, my son’s, was to do what I do most and doodle a bunch of drawings on sticky notes and then cover the board in the sticky notes. And then layer over some decoupage and that would be the project. I still kind of wish I’d tried that.

I also considered drawing what I wanted the board to look like in my more comfortable medium of pencil or ball point pen and paper and then scanning it in and having someone create a decal out of it that I could just lay on the board. I got a head-shake from the Mrs. on that one.

In the end, I realized I needed to return to my painting. I’ve been wanting to return to painting for about five years now. Time and attention span being my enemies I’ve never gotten around to it, aside from a brief foray into ink and watercolors a couple years ago.

So I found myself taking on a big project with a medium that I hadn’t touched in about 18 years with a due date. For some, that might get the creative juices flowing but for me that’s a guaranteed drawer’s block.

My first draft of the skateboard went like this: 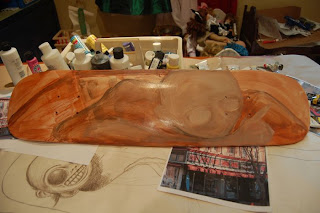 and then went to this: 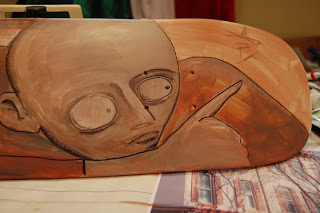 at which point I was totally disgusted and went to this: 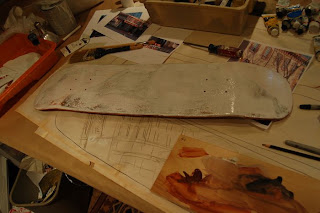 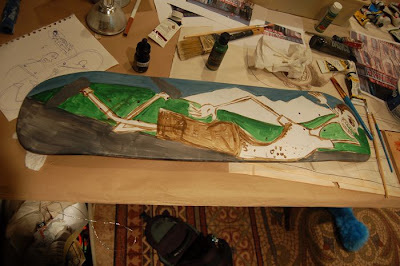 which was based on a drawing in a notebook that I liked a lot. I lost that scrap of paper. 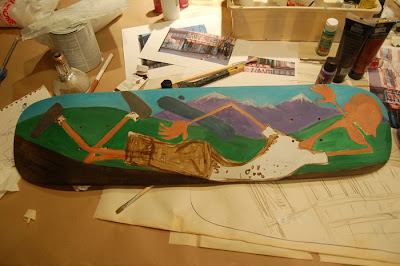 and ended up as this:

A few days after finishing I shipped it back to Montana and this weekend it went live along with more than 40 other decks that really look amazing and I’m honored and humbled to be included alongside them. 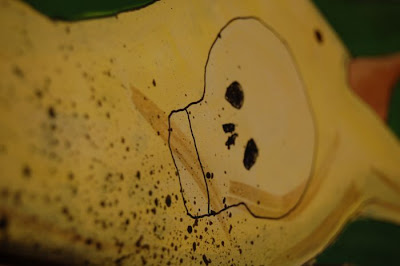 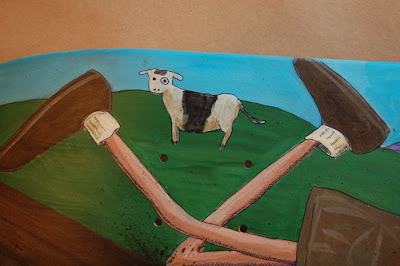 If nothing else, in the end, I can get the board back if it doesn’t sell and I’ll probably end up hanging it in the office. The real bonus is that it got me back into the painting again and I’m trying to really push myself to keep at it. I already have another small piece in the works — that honestly I haven’t touched in a month, but it’s down in the kids’ craft room awaiting my return.

5 Responses to Skateboard of Frustration