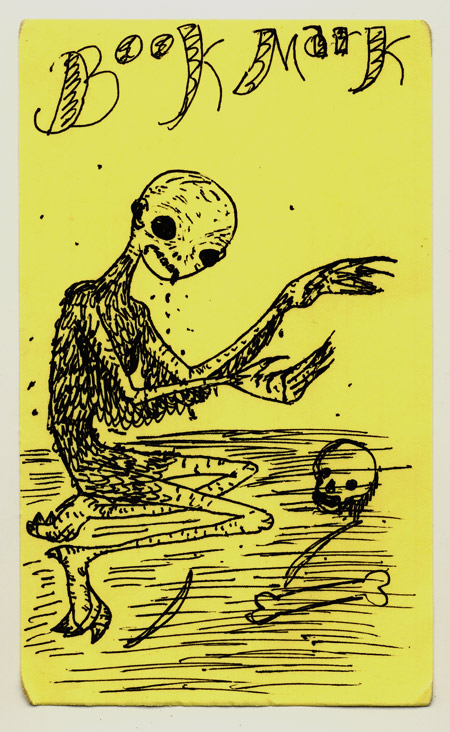 This is the bookmark my daughter made for me this evening as she was reading about The Epic of Gilgamesh. It’s a Mesopotamian poem found written on tablets and is considered one of the earliest forms of literature found in the world.

I haven’t read it but this is her depiction of the creatures that inhabit the underworld as described in the poem. At one point Enkidu, Gilgamesh’s friend, has a nightmare about paying [a price] for helping slay a bull:

The heavens roared, and earth rumbled back an answer; between them stood I before an awful being, the somber-faced man-bird; he had directed on me his purpose. His was a vampire face, his foot was a lion’s foot, his hand was an eagle’s talon. he fell on me and his claws were in my hair, he held me fast and I smothered; then he transformed me so that my arms became wings covered with feathers….

He goes on to describe the people that inhabit the underworld:

There is the house whose people sit in darkness; dust is their food and clay their meat. They are clothed like birds with wings for covering, they see no light, they sit in darkness.

It’s the second day of the new school year and have high hopes that I at least get more cool bookmarks out of her World Literature class.

This entry was posted in daughter, gilgamesh. Bookmark the permalink.