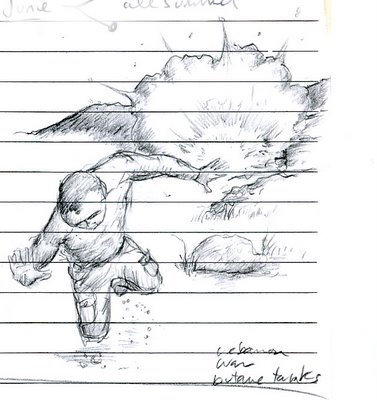 We were at a dinner part this past weekend with friends. The weather was May perfect sunshine, light breezes and nice chill in the air. We pulled out their chiminea and got a fire stoked. At one point the conversation turned to movies and there was a survey of “who likes horror movies?” Some said they enjoyed a select few, others said they had no time for the genre.

Horror movies turned to talk of Jaws which, in turn, turned to an episode of MythBusters where they tested the idea of shooting a scuba tank with a rifle and making it explode. That brought about some chuckles about the whole concept.

Then one of the guests talked about how he witnessed his uncle’s house in Lebanon being blown up by men shooting the butane tank outside the house during the war. Apparently, they use butane rather than propane for heat/cooking in that region. He remarked that that was horror and one of the reasons he left Lebanon.

That conversation’s been bouncing around in my head for a few days — how many of us here in the States and other ‘stable’ lands have never witnessed true horror — is that why we have a love affair with horror movies and scary rides? Most of us don’t know what it means to be scared in real life, day-in and day-out.

What happens when our troops come home from living in the horror of war? While they have ‘normalcy’ to come home to — what’s left in and of their minds? What about their families? What about their community? For that matter, what’s the lasting effect on those people that live in lands where war is ‘normalcy’?

I just need to appreciate more the lives we have.

———————-
Along those lines, here’s a shout-out to a charity that does good work for the US troops and their families: Fisher House Foundation. Here’s a review of the charity at Charity Navigator. And here’s a charity, American Near East Refugee Aid (their review on CN) that works to improve communities in the Middle East ravaged by war.